You’ve probably seen innumerable images of Rainbow Mountain on Instagram. If you’re already in Cusco, you’ve also noticed its distinctive seams of colours all over the city’s hostels and travel agencies. This is Vinicunca, the famous Rainbow Mountains of Peru!

What Does the Rainbow Mountains of Peru really looks like?

Also known as Montana de Colores and Montana de Siete Colores, the Vinicunca Rainbow Mountain has gained enormous popularity in recent years. It is probably on track to overtake Machu Picchu as the second most popular tourist destination in Peru.

What does the Rainbow Mountain’s appearance really look like?

Vinicunca Rainbow Mountain is listed as one of National Geographic’s 100 places to visit at least once in a lifetime. This location is exceptional not only for its spectacular beauty but also for its precious geographical naturalistic value.

The Rainbow mountain is made by sedimentation of 14 various. Vibrant minerals giving the mountain a rainbow-like look by blending turquoise, lavender, gold, brown and other colours.

Several years ago, the mountain was completely covered in snow. Which made it impossible to properly appreciate its grandeur. So, this buried gem might have remained a secret even today, if the snow had not melted!

You probably see a lot of heavily edited pictures of Rainbow Mountain on social media sites like Instagram. Even though the mountain is undoubtedly beautiful, it probably won’t match what you see online. So, be prepared for the colours to be considerably softer than what you see online, but still worth viewing in person.

If you want to capture the greatest pictures, it’s preferable to go on your hike during sunrise or dusk. This will not only give you comfortable temperatures, but also the greatest lighting.

The Rainbow Mountain which towers 5200 meters above sea level is renowned for its kaleidoscopic natural splendour. Reaching the summit is quite challenging and the absence of oxygen at a high altitude may be particularly taxing on the body. So better to go with specialized guides. And don’t forget to carry plenty of water!

It takes roughly 2- 3 hours to trek to the top from the base and another 3 hours to return. People with horses are waiting at Rainbow Mountain to take the exhausted hikers up for a fee of $22. 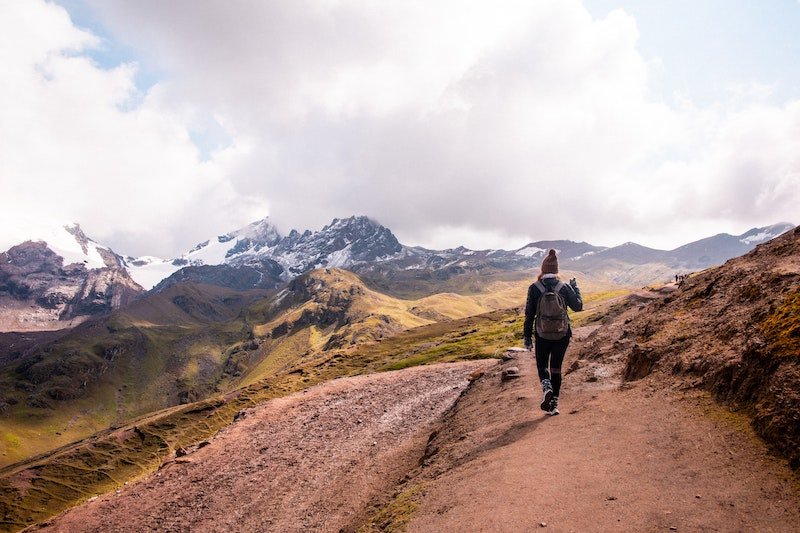 What does the Rainbow Mountains weather really look like?

Most of the time, Rainbow Mountain is visible in all of its glory and appears to be a sizable water colour painting. However, the hike is not all unicorns and rainbows. When it rains and is cloudy, taking a hike to Rainbow Mountain may be an awful, muddy and nearly pointless experience.

The mountain simply doesn’t look as lovely when everything is all wet. You will not be able to even take any nice photographs at the summit. Therefore, the dry season, which runs from March to November, is typically the perfect time to explore Rainbow Mountain. However, the weather can change drastically going from snow to rain to scorching sun in an hour, so be ready at all times!